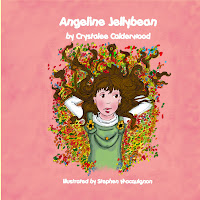 Angeline Jellybean, written by Crystal Calderwood and illustrated by Stephen Macquignon, will be released in November. It's a children's picture book to be read to non-readers and for readers up to second or third grade.

Angeline love jellybeans and will eat almost nothing else. She wants jellybeans for Easter, Christmas, and her birthday. She stashes them under her bed for snacks. However, what happens when her system overloads on jellybeans?

Prairie Dog Cowboy, by V. Gilbert Zabel and illustrated by Jordan M. Vinyard, will be available next week. The book is written for a juvenile audience and contains a storyline based on historical facts and setting, which appeals to readers of all ages.

Although his mother says he'll never be able to do anything but work with his back, Buddy Roberts wants to be a cowboy and ride a horse. From the time he's four-years old, he herds his father's cows and calves on foot, even in winter.

Buddy impresses neighbor rancher Caleb Hyman, who wonders why the child works hard while his older brother contributes little to the family farm. But, Caleb sees the man that Buddy will become. He promises the boy a job on the ranch when Buddy can rope a prairie dog. The difficult goal becomes harder when older boys discover Buddy practicing and begin an harassment campaign.
Posted by Vivian Zabel at 5:33 PM 38 comments:

Purpose of this blog

When marketing decisions must be made, 4RV Publishing needs a forum to reach the public.

Hopefully, readers will be willing to share their impressions and ideas concerning titles, covers, or other components so that we can make a wise decision.
Posted by Vivian Zabel at 6:56 PM 1 comment:

Vivian Zabel
4RV Publishing is a small traditional press which pay royalties to authors and illustrators. Submission guidelines are shown on http://4rvpublishingllc.com. Authors and illustrators are some of the best in the book community. Books for children, tweens, teens, and adults are produced, all of high quality.